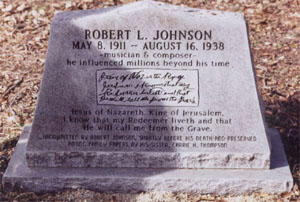 Back about a hundred years ago, really,

the BLUES was going around the South.

and the BLUE'S greatest was ROBERT JOHNSON.

RJ lived in Mississippi and died there.

He had a few FAMOUS NOW not then recordings,

owned a GIBSON guitar and frequented out of the

substances and rowdy music. Ungodful music at that.

sort of like the Cathay de Grande in L.A.

lived a short life and until recently his burial site

was a mystery among other questions.

My partner for 20 years KIKI MORETTI was

writing a book on our SCENE

The BLUES was in the foreground of anarchy music,

it was of the devil... not to say punk is devil music

but many SAID punk was bad if not evil until

20 years later we make our commercials with punk music

We were into the finding of the real resting place,

in question for years, of ROBERT JOHNSON.

have been working with for 6 years to help the upkeep

of this artist's grave site.

the REST IS UP TO YOU

WE DID CREATE PRODUCE and HAVE A

in August of 2004 in Greenwood, Mississippi.

as Keith Morris says THE SHIT HIT THE FAN

but too much rambling here

YOU MUST see the info :

plus... the MANY MANY

EXPLANATIONS ridding us of

ANY PART in the cruel creepy

KIKI, THE DEACON, AND MYSELF

UPON HELL THAT BEFELL us

JUST TRYING TO GIVE comfort to the